The GRRRLS 4th Birthday Competition is a competition that was organized by AViVA to celebrate GRRRLS' fourth birthday. The competition was announced on July 13th, 2021 and ended on August 15th.

To celebrate GRRRLS' fourth birthday, AViVA organised a creative competition in which participants had to recreate the GRRRLS artwork in their own style. This included drawing, sculptures, baking, photoshoot, gacha, etc. The competition was announced and began on July 13th, 2021.[1] The competition later ended on August 15th. The winners were later announced on August 28th.[2] The winners received a signed GRRRLS tee as a prize.

Rules participants had to follow in order for their entries to be counted. 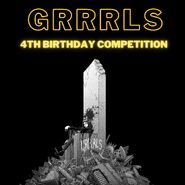 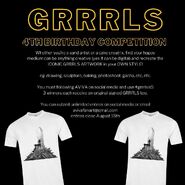