Edit
Stub
This article is a stub. You can help AViVA Wiki by expanding it.

Jamie Guise is a main protagonist in SELF/LESS. He is a Dual Citizen and belongs to Clan Ember.

Jamie is described to be about seventeen or eighteen at the oldest, though he is confirmed to be seventeen due to the lack of his Partnership Seal. Jamie has wavy chestnut hair that falls into his light ice-blue eyes. His clothing changes throughout the book, but his artwork depicts him in a plain black shirt, blue, fur-lined denim jacket, grey cargo pants and black cargo boots.

Jamie is soft and comforting, especially to Teddy. He never pries and tries to be helpful where he can. He is especially kind to Teddy Veodrum, and was in a romantic relationship on her. However, his sweet nature does not mean he is always sweet, as he swears about Link Drakk, calls Paula evil in Kit's defence and devises several plans to spy on him.

Jamie is a Dual Citizen, meaning he is one of the select few of the Underground who may go to the surface without being caught. He lives with either a relocated family or generous Sympathisers, and his 'family' often visits Maree's coffee shop.

Jamie first appears in Maree's coffee shop, where Teddy Veodrum is working. He asks to see her and makes excuses to keep her around, asking for sauce (but not using it on his chips) and asking her what she's doing after her shift (to which she refuses to reply). Maree asks Teddy suspiciously if she knows him and Teddy suspects that Jamie is either from the Underground or an undercover Council Eye.

He appears again during Teddy's Partnership, when she is partnered with him. Teddy is freaked out and runs back to her room to find a note from Kit, asking her to visit the warehouse at midnight after her Partnership. Jamie appears here, too, and he and Kit explain the Partnership plan. Several Sympathisers inside the City Council network fudged the results of Teddy's Partnership so she would be partnered with Jamie, solidifying his image as a normal Metropolis citizen. Since Teddy counts as a Sympathiser, this also means that she and Jamie can work on the Underground supplies together. When Teddy hears of the plan, she is furious and believes that her whole life is a fabricated lie. When she storms off, Jamie follows her yet again, sneaking into her house. He talks to her without Kit and manages to calm Teddy down by agreeing with her when she accuses Paula of being behind the missing supplies.

Jamie and Teddy go to replace Kit's watch for the next supply drop, for Kit had been strangely moved out of the way. The pair sneak onto a rooftop and watch as Link, Paula and a group of several corrupted City Guards murder Maree, taking the supplies with them. The evil group then prepare to move on to Mrs Lowry's house, where Kit is keeping watch. Panicked, Jamie and Teddy go to warn her. Teddy finds her mother, who is revealed to be a Sympathiser and assisting with the drop-offs. The four of them hide in a compartment in Mrs Lowry's staircase, listening to Paula and Link. Kit finally succumbs to the truth that Jamie and Teddy were right. Teddy comes up with the plan to get Paula taken away by the real Sanitisation Crew, and Kit and Jamie tell her that because it was her idea, she takes Paula's place as the leader of Clan Ember. Teddy is once again horrified about being thrown into something she never wanted to be a part of and tries to get out of it, but Jamie and Kit convince her that she will be a great leader. 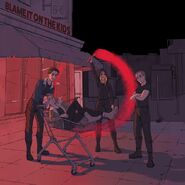 Jamie appearing in BLAME IT ON THE KIDS (far left)
Community content is available under CC-BY-SA unless otherwise noted.
Advertisement